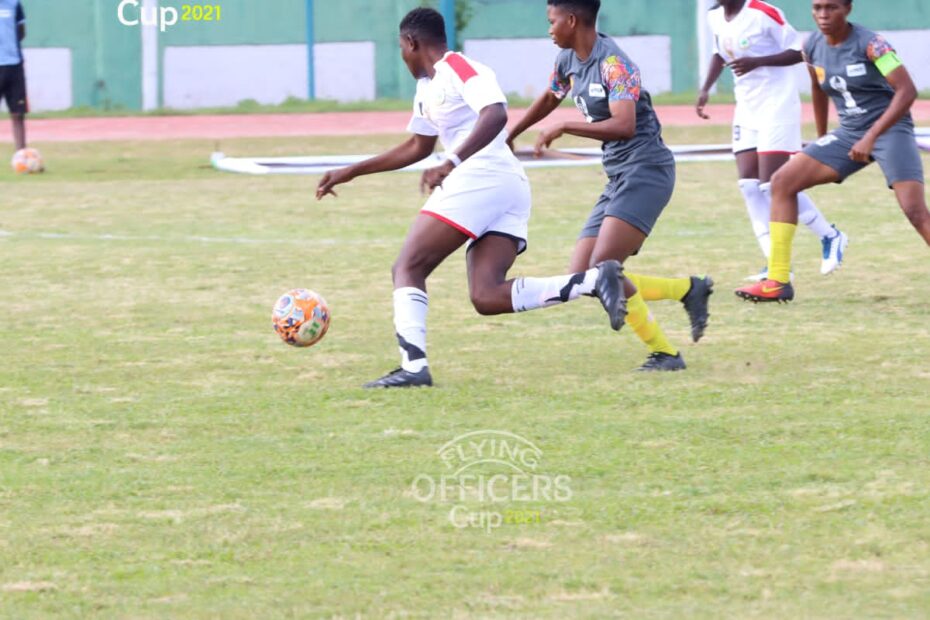 Four more clubs qualified for the quarter final of the 2021 Flying Officers Cup after the conclusion of Group C and D games on Match Day 7.

In Group C, Sunshine Queens pipped SGH Academy 1-0 to make it to the quarter final.

Maryam Aluko took advantage of an error from Owogbemi Kehinde to slot in the winning goal for Sunshine Queens in the seventh minute.

Confluence Queens thumped WACO Ladies FC 4-0 in the second Group C game of the day to qualify for the quarter-finals with an 100 percent record so far in the tournament.

Ibinabo Georgewill in the 29th minute scored the first goal of the game for Confluence Queens. The former Rivers Angels forward headed in a cross from Suliat Hassan to make it count for the New Direction Ladies.

In the second half, two quick goals from Arit Usang (58th minute) and Martha Peter (61st minute) extended Confluence Queens’ lead to three while Ibinabo Georgewill scored her second goal of the match in the 63rd minute to make it 4-0 in favour of the Lokoja based side.

Lakeside Queens almost caused a major upset of the tournament but unfortunately, an own goal by Lakeside Queens goalkeeper and player of the match, Ambali Sekinat with the last kick of the game won the match for Nasarawa Amazons.

Edo Queens in the last game of the day earned a 3-0 win over Danaz Ladies FC to join Confluence Queens as the two clubs with perfect record so far in the tournament.

Chioma Olise in the 23rd minute tapped the ball into the net after Danaz Ladies goalkeeper failed to handle the ball well for Edo Queens first goal. The former Royal Queens player did well to give the Obaseki Ladies the lead.

Deborah Odiagbe in the 39th minute doubled the lead for the Obaseki Ladies with a header that came off a rebound from Danaz Ladies goal post while Rebecca Ajimuda made it 3-0 in the 51st minute with her second goal of the tournament.

Edo Queens finished at the top of Group D with a maximum of nine points from three games and completed the list of Nigeria Women Football League (NWFL) Premiership clubs to qualify for the quarter final alongside Nasarawa Amazons (6 points) as Danaz Ladies FC (3 points) and Lakeside Queens FC (0 point) bowed out of the tournament.

In the Quarter-finals fixtures on Monday, 18th October, Royal Queens and Osun Babes will play the first game by 10am, while FC Robo Queens and Naija Ratels FC will play by 1pm.

On tuesday, Confluence Queens and Nasarawa Amazons will Kick-Off by 10am, while Edo Queens and Sunshine Queens by 1am.

Royal Queens Vs Osun Babes 10am

Confluence Queens Vs Nasarawa Amazons 10am