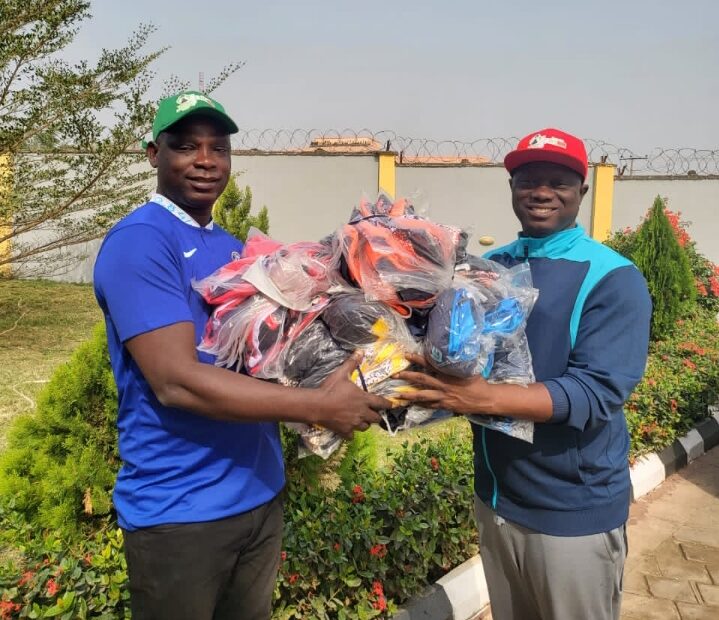 Initiator of the yearly Isiaka Adetunji Adeleke Memorial Cup, Rep Bamidele Salam on Thursday, presented set of jerseys each to the eight Quarter-Finalists of the ongoing tournament.

The House Of Representative Member, representing the good people of Ede North, Ede South, Egbedore an Ejigbo Federal Constituency of Osun State presented the set of jerseys to the Chairman of the organising Committee Oladele Bamiji, who is expected to hand it over to the eight club sides.

The Charismatic House of Representatives Member commended the uprightness of all the teams that participated in the competition, particularly, the Quarter-Finalists, who have shown great level of Sportsmanship, doggedness, and commitment all through the competition.

While congratulating the eight teams on behalf of the other members of the organising committee, the Organising committee Chairman, Oladele Bamiji (HOB) noted that, the initiator of the Competition, Rep Bamidele Salam has deemed it fit to continue presenting set of jerseys to the last eight teams, since the inception of the Competition, three years ago.

HOB as he is popularly called enjoined the last eight teams to stay away from any form of indiscipline and imbibe the spirit of Sportsmanship as the Competition progresses.

“Our plan every year is to make the Competition bigger, and thankfully, this year, we have moved from just one federal constituency, to all parts of the state.

“Also, from the inception of this competition, we have been presenting set of jerseys to the last eight teams, this has become a tradition and am sure the teams will really appreciate this.”