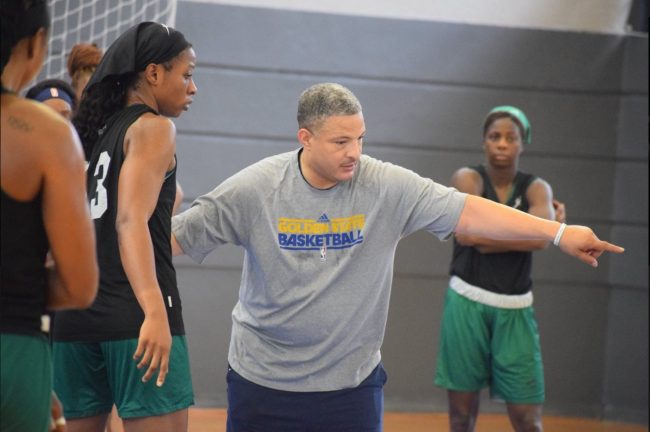 “What they have done to these girls and want to invest in grassroot is absurd. First of all , you can do grassroot Basketball while still playing international Competition.
International Competition is what Inspires a lot of grassroot from the beginning to want to play the game in the first place”. Hughley the senior coach of the Nigeria’ Women Basketball team could not help but utter his thoughts aloud trying to understand the rationale of placing a self inflicted ban on international Basketball for two years by the Federal Government.

In an exclusive interview with Queen Moseph earlier in the year , he also told her that he is yet to get any payment from his outstanding bonuses.
Hughley is being owed for the FIBA women’s World Cup qualifying tournament in Serbia held in February and the Tokyo 2020 Olympics, Before then Musa Kida had been paying him on tournament basis when his contract was not renewed after the 1 year expiration.

” I have not heard anything because there has been promises that has not been met so I am just tired of dealing with it “. He told Queen Moseph .

Hughley, whose instant value upon Arrival on the team can not be swept under the carpet as he took over the team seven weeks before the the 2018 FIBA women’s World Cup in Spain where he led the team to an eight place finish at the world cup , a first by an African team. He also won back to back Afro basket titles, qualified for the Tokyo Olympics and the 2020 world cup in Australia while recording an historic win over France.

All these feats bears no value as FIBA replaced D’ tigress with Mali at the upcoming FIBA Women’s World Cup in Australia scheduled for September 22 , 2022 because of a self inflicted two years international ban on Basketball by the federal Government.