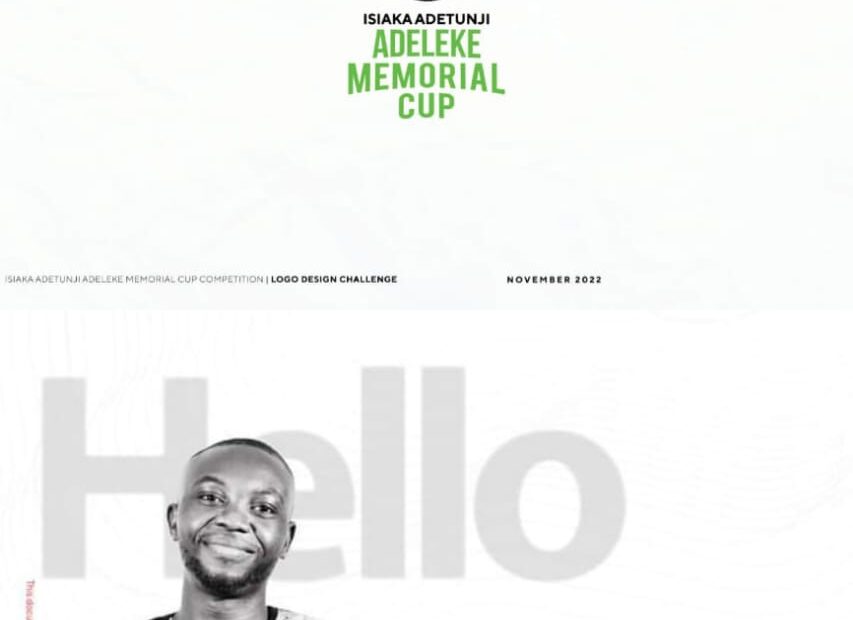 An Iwo born Graphic Designer, Opeyemi Fawumi has won the Otunba Isiaka Adetunji Adeleke Memorial Football Competition Logo Challenge and will be rewarded with a cash prize of N150,000, by the sponsor of the Tournament, Rep Bamidele Salam.

Fawumi was announced as winner on Saturday Morning after his proposed design was picked ahead of over two hundred entries submitted.

In a bid to clearly promote, it’s relations with the people, and additionally strengthen the profile of the Competition, Sole Sponsor of the yearly Football Championship Rep Bamidele Salam, member Representing Ede North, Ede South, Egbedore and Ejigbo Federal Constituency decided to throw out a challenge on social media on the 11th of November 2022, with the winner taking home N150,000.

The Logo Challenge held from the 11th of November to the 16th of November and all entries that came in during this period were duly acknowledged by a committee set up to select the winner.

The Selection process for the new logo of the Otunba Isiaka Adetunji Adeleke Memorial Football Competition started on the 16th of November, as the two hundred and thirty three (233) entries were trimmed down to seven (7) , before the committee finally chose Opeyemi Fawumi’s design, following further rigorous analysis.

Speaking after announcing Opeyemi Fawumi as the winner of the Logo Challenge, Rep Bamidele Salam thanked everyone that participated and those that supported from when the Logo Challenge was announced, saying that the new brand identity stood out and represented what the late Doyen of the Adeleke’s Dynasty stood for.

“The Selection process was a daunting task as there were alot of good entries, which made it difficult to make selection.

“Awolowo’s entry came first after a well rigorous process of reviewing about 233 submission from young talented graphic designers who responded to the call for entries.

“I thank you all for your enthusiastic participation in the selection process.

“We have taken notes of your various suggestions for improvements in the logo and the entire competition.

“Meanwhile, congratulations to the overall winner and all other participants. You are all winners.” He concluded.

The Memorial Championship is dedicated in honour of the first Civilian Governor of the State, Otunba Isiaka Adetunji Adeleke and solely sponsored by Rep. Bamidele Salam who represents the good people of Ede North, Ede South, Egbedore and Ejigbo Federal Constituency of Osun State in the National Assembly.

A press conference, official unveiling of logo and presentation of prize money to Opeyemi Fawumi will take place on Tuesday, the 22nd of November 2022 in Ede.