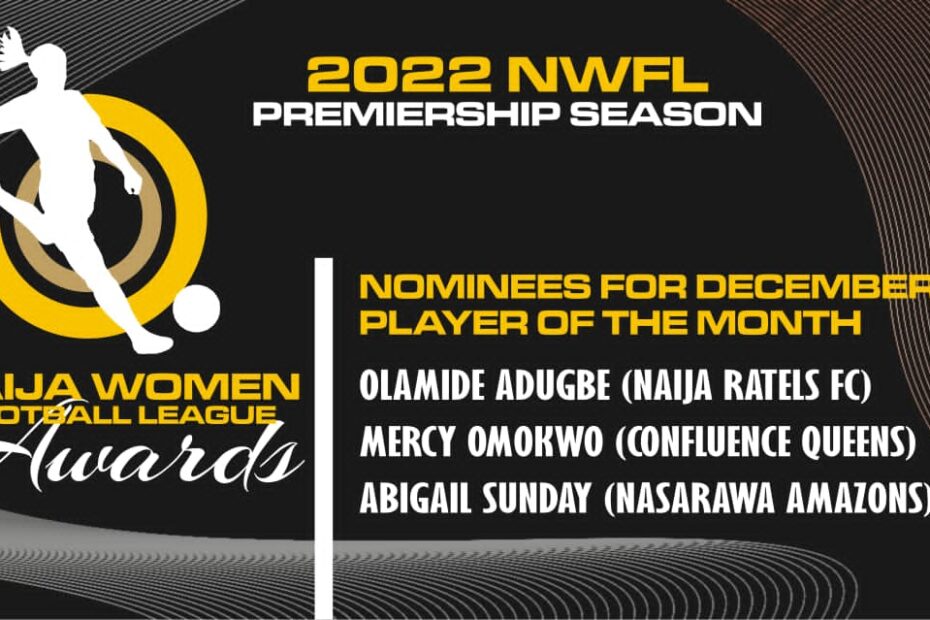 The Organisers of the Naija Women Football League Awards have revealed nominees for the Player and Manager for the month of December.

Mercy Omokwo played all three games for Confluence Queens in the month of December, scoring four goals, including the first hat-trick of the season against Pelican Stars on Matchday one. She also went on to score the only goal of the match against Osun Babes, to give her side successive victory in the new campaign. Her team is placed second in group A with two wins and a draw.

Olamide Adugbe of Naija Ratels is the only player in the league to have scored in all the three games played in December. In all the games, she came in as a substitute, scoring one against Osun Babes on Matchday one, leveled up in Benin against Edo Queens in the 89th minute through a wonderful free-kick and scored two against Adamawa Queens in matchday three. Her team is placed 1st on the log in Group A, with two wins and an away draw.

Abigail Sunday joined the ‘Solid babes’ from Sunshine Queens during the summer and has quickly adapted to their style of play. She scored a brace in the game against Osun Babes to earn her side a 4-0 victory over the Omoluabi Queens. Nasarawa Amazons are third in group A, her team recorded two victories in two games.

In the Managers Category, Naija Ratels Bankole Olowookeere, Nasarawa Amazons Christopher Danjuma and Confluence Queens Liadi Bashiru all made the final shortlist for December Manager Of the month.

Bankole Olowookeere, whose side is new in the league won two of their home games and drew away to Edo Queens in Benin.

The ‘One day At A Time’ Ladies recorded a remarkable 2-0 and 5-2 wins against more experienced sides Osun Babes and Adamawa Queens at the Area 10 Sports Complex, while on Matchday 2, they succeeded in picking a precious draw at the Samuel Ogbemudia Stadium, Benin.

Christopher Danjuma’s side won big in the two games played in the month of December. The ‘Solid Babes’ started with a comprehensive 3-0 away victory in Calabar against Pelican Stars and recorded a 4-0 victory in Lafia against Osun Babes.

Liadi Bashiru of Confluence Queens got off to a 4-0 victory at home to Pelican Stars, won Osun Babes 1-0 at the home ground in his second game, but was held by Edo Queens in his third game at the Confluence Stadium, Lokoja.

The names of nominees was shortlisted by a panel of NWFL Premiership experts, who will also decide the winners on Thursday, 6th of January 2022.