The Gains Of The Aisha Falode led NWFL Board 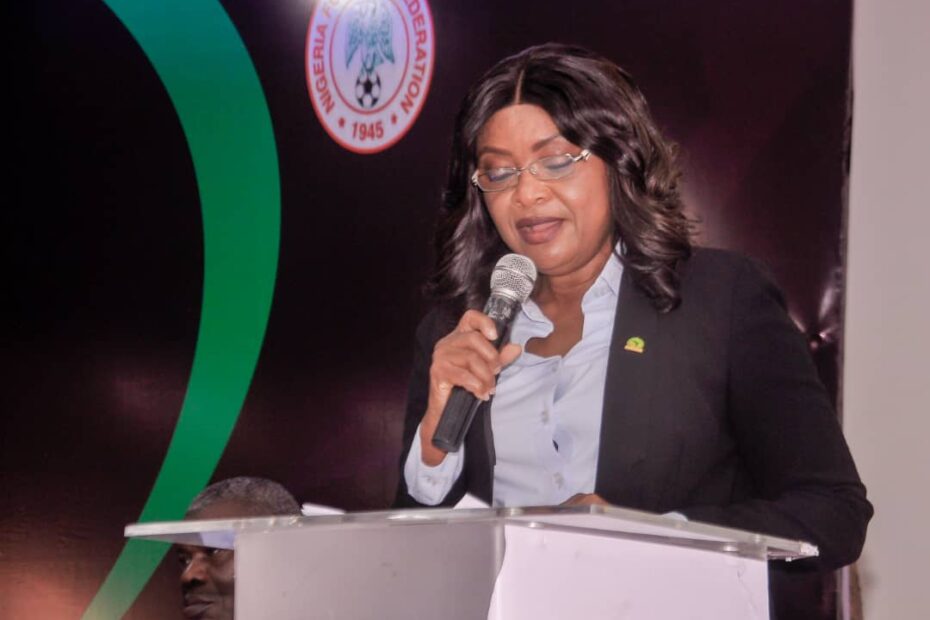 The present board of the Nigeria Women Football League headed by Aisha Falode as Chairperson was sworn-in in 2017 by the president of the Nigeria Football Federation, Amaju Pinnick.

Aisha Falode, is the only female board member of the Nigeria Football Federation, while the NWFL Vice Chairperson is the only female FA Chairman in Nigeria, the RT. Honourable Margaret Incheen. These tell a lot about the dynamic activities, innovations and achievements of the NWFL.

In the first year of the League board, the NWFL showed a road map towards a positive development of the gender game through the league.

The league board  introduced the Super Six Challenge that came after the Super League in the NWFL Premiership League to determine the season’s Champions in the 16 team Club Women’s League.

The Super Six 2017 edition was hosted and sponsored by the Edo State Government by His Excellency, Gov. Godwin Obaseki. And in five years, Edo State has hosted the Super Six twice, in 2017 and 2022.

This edition of the Super Six saw the introduction of prize money to the Women’s League, as the eventual league Champions, Nasarawa Amazons FC of Lafia, went home with a cash prize of N5 million, second placed got N3m and third placed got N2m. This was the first time prize money in millions was paid to the women’s league champions and other top winners.

After the introduction of prize monies in 2017, the NWFL headed by Aisha Falode, never looked back uptil date even as the new season for the 2022/2023 resumes on September 14.

The board of the NWFL entered into a partnership with the LaLiga Women’s Football Department in Spain to develop the Nigerian league. Here, the coaches of the 16 League clubs, later reduced to 14 clubs, are trained regularly by the LaLiga Women Department on Tactical Discipline and progressive open play, with focus on goal scoring and wining mentality. This stood out to be another first for women football in Nigeria.

This partnership witnessed the coming of the “LaLiga Show Your Other Side” programe which assembles the best players in the Premiership League season to play in a Free Style Football Challenge. This comes immediately after the season ends.

The NWFL entered into a partnership with the United Nations on the Protection and Safety of the Girl Child Against Discrimination, Slavery and Human Trafficking.

The Aisha Falode-led NWFL board signed a Partnership with UNICEF on the Protection for Refugees in Nigeria, Protection Against Domestic Violence On The Girl Child and Eradication of Girl Child Prostitution.
This programme has been held twice in Nigeria at the Elegbeta Sports Centre, Lagos Island and the Samuel Ogbemudia Stadium, Benin City, Edo State.

The Aisha Falode-led NWFL introduced the NWFL Champions Shield where the League Champions play a kind of Charity Cup against the Aiteo Cup winners to know the Champion of Champions for each season.

The board started the payment of Match Indemnities to referees on home and away games, this helped stabilized the women’s league and aided development.

One year after Aisha Falode-led board took over the mantle of leadership of the league board, the Super Falcons had seven home-based players as regulars in the Falcons team to the 2018 African Women Cup of Nations in Ghana. They include: Anam Imo, Rashedat Ajibade, Chidima Okereke, Amarachi Okoronkwo, Uchenna Kanu and Chiamaka Nnadozie among others.  These same players re-presented the country at the 2019 Fifa Women’s World Cup.

The Falode-led board improved the standard of the league and level of competition with the use of international standard referees who are FIFA Referees. The Referees’ performance grew higher as Aisha Falode introduced a monthly award for the Best Referee, an award sponsored by the Lagos FA Chairman and First Vice President of the Nigeria Football Federation, Barrister Seyi Akinwunmi. This award has been on consistently for four years.

The Introduction of Match Assessors to the NWFL Premiership League aided the development of the women’s league, as assessors’ objective reports from match venue improved the credibility of the league and helped in unbiased assessment of league.

The Aisha Falode-led NWFL introduced the CAF and FIFA Trainings/Seminars for Club Media Officers, a move that has brightened the media coverage and reportage of the NWFL League.

The league board also introduced the CAF and FIFA Management trainings for Women League top Managers. This has boosted the knowledge and experience of the Managers who are now well equipped to do the job better than before.

The Aisha Falode-led board introduced the Club Licensing and Registration Process for all the NWFL Premiership League clubs in Nigeria. This has smoothen the registration processes for the clubs while they prepare for the season.

With the Aisha Falode-led NWFL, the coverage and reportage of the women’s league in all sections of the media quadruple. The print, electronics, and Social Media consistently covered and reported the Women’s Football League more than any football league in Nigeria.

The Introduction and Insistence of standard remuneration for all players and officials of the NWFL Premiership League clubs, and Bank Guarantees to assure unbroken monthly payment of players salaries all through the season.

Aisha Falode’s tenure as Chairperson of the NWFL, also witnessed two Premiership clubs achieved Pay Parity with the men’s football clubs in their states.
Edo Queens FC of Benin were the first to achieve pay parity in Nigeria, followed closely by Bayelsa Queens of Yenagoa and other clubs like Delta Queens and Nasarawa Amazons are working towards that direction, with few steps left to achieve this milestone.

Falode, made players Health Insurance Scheme and Cover very important for all the NWFL Premiership Clubs. For effective compliance, players insurance documents are submitted alongside club registration before the start of the season.

With the examplary Administration of Aisha Falode, the Nigeria Women Football League, achieved a women’s football revolution at the 2020 NWFL Super Six, at the Dipo Dina International Stadium, Ijebu-Ode, Ogun State, when three Deputy Governors, the Minister for Youths and Sports, the NFF president and Fifa Council member, the First Vice president, four state Sports Commissioners, the FA Chairmen of six states and 10 Executive board members of the Nigeria Football Federation among other state government functionaries, were all in attendance watching matches of the 2020 Super Six at the same time at the Dipo Dina International Stadium for upward of four days. That edition of Women’s league Super Six was the biggest sports event at the period in Nigeria.

Falode, got two Sponsorships for the NWFL Premiership League in 2022 from the Peculiar Ultimate Concerns Ltd for the regular season and the Tulcan Energy Resources strictly for the Super Six.

The sponsorship from the Peculiar Ultimate Concerns Ltd is the first of its kind in Nigerian football league, male or female. In full completion of the Sponsorship package worth N3.5 billion, the sponsors will build 14 mini stadia for the 14 Premiership clubs in the NWFL. These stadia will be equipped with international standard dressing rooms, hostels, floodlights and Club House, in pursuits of making all the NWFL Premiership Clubs, true professional clubs.
Before this achievement by Aisha Falode-led board, the Nigeria Women’s League last got Sponsorship in 2006 with a soft drink giant.  The league had remained without Sponsorship for 16 years before Aisha Falode gave it a life again, with two Sponsorships at a time.

Despite all the successes achieved by the Aisha Falode-led NWFL, the league board still had its challenges.

The uniform payment of N150,000 monthly salary for the least paid NWFL Premiership player has been a huge challenge, as clubs have been very adamant to comply with this.
From all indications, this seems an impossible task to realise going by the body language of the clubs Chairmen.  Some clubs pay their players as low as N35,000 monthly salary, while some don’t even pay salaries at all to some of their players.

The failure of 100 percent compliance with the Club Licencing Regulations by the clubs as it relates to players transfer, has been a huge challenge.

This has become a problem for the NWFL coupled with player’s insincerity tainted by desperation to change clubs without following due process.

On suspicion or tip off of a possible match fixing, the NWFL board has been able to immediately cancel match appointments done by the NFF Referees Appointment Committee, and  replace suspected match fixing referee before match kick off.
In the last five years, the Nigeria Women Football League has recorded more successes than ever before, since the inception of women football in Nigeria.