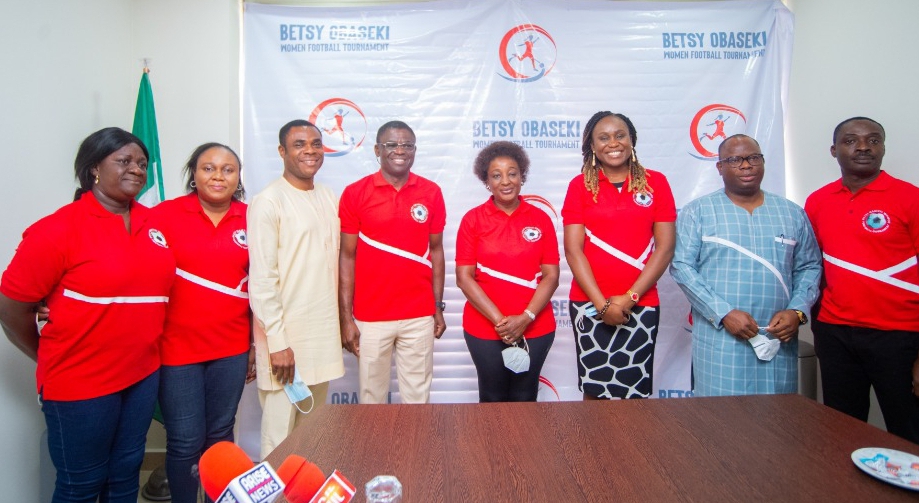 The First Lady of Edo State, Her Excellency Mr. Betsy Obaseki, has revealed that the Invitational Club Championship named after her, the Betsy Obaseki Cup, is out to checkmate human trafficking and other gender based violence in Edo State.

She said these yesterday in Abuja at the occasion of the official press conference to herald the club competition which will involve two Nigerian former women’s league Champions, Rivers Angels of Port Harcourt and Bayelsa Queens of Yenagoa, together with 10 other clubs in the NWFL Premiership and Championship.

On the choice of the theme for the tournament, the Edo First Lady explained: “Prior to the inception of my husband’s administration, human trafficking was rife in Edo State, with Edo occupying the ignoble position of being the foremost state in the illicit trade.

“Five years down the line, Edo has moved to number five in the nation, owing to the commitment of this administration to job creation, infrastructural development, human capital development and the sheer will to tackle this menace headlong through innovative approaches.

She added: “From the onset, I took delight in my role, in the supportive capacity, to tackle this menace and other forms of gender-based violence through various initiatives targeted at the girl child. Among them are the Edo Women for Agriculture and Enterprise; Betsy Angels Shelter; Edo Youth Academy, among others,“ stressing that- Her husband’s efforts in tackling gender-based violence have also been yielding results, culminating in the inauguration of the Edo State Gender-Based Violence Management Committee, which I chair.

The Betsy Obaseki Women Football Competition will be another tool for achieving this goal as it affords our girls the opportunity to showcase their skills and also provide mentors for those aspiring for future careers in the preferred line of sports, promoting the sporting industry among grassroots women and girls.