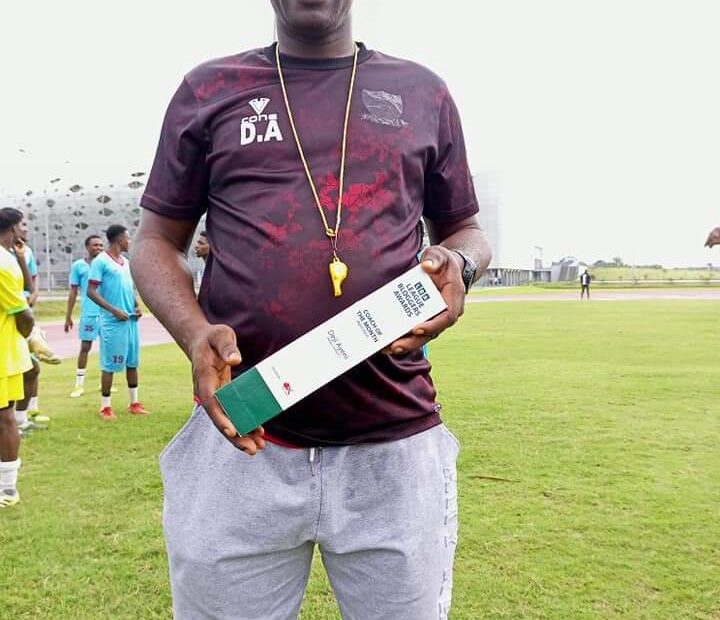 Cynosure football Club of Abakaliki were the champions of the South South , South East Preseason Tournament in 2018 , they defeated Abia Warriors by a lone goal in the final match.

Prior to the final match the modest NLO club side had defeated Heartland football club of Owerri and Rivers United of Port Harcourt both NPFL sides.

This modest Club Cynosure football Club was handled by Coach Deyi Ayeni with relatively unknown players. It was an opportunity and a good platform for Ayeni to display the potentials in him.

From Cynosure football Club Ayeni moved to an NNL side Ekiti United before he was called up as an intervention coach in Sunshine Stars this season, the club was already courting Relegation.
Coach Ayeni against all odds with little or no time was able to stir the club out of Relegation.
This feat he achieved with little or no motivation.

Deji Ayeni was hired by Akwa United on a rescue mission mid season after the club suffered a 4 nil deficit in the hands of Rivers United. That was the biggest loss in the history of the club.

Tobexmedia.com recently had an exclusive chat with Coach Ayeni after being crowned LBA Coach for the Month of April.

” I never thought I will win the LBA coach for the month of April even though I had my personal target of going 10 matches unbeaten which was eventually punctured.
It however didn’t register in my subconsciousness that the fact we didn’t lose any match in April will be rewarded”.

Deji Ayeni further explained that the circumstances in which he stired his former club Sunshine Stars from Relegation toughened him for the task ahead.

” I appreciate the management of Sunshine Stars for believing in me because that was the beginning of transformation in my career.
If I can manage Sunshine Stars without any hope of survival in the league, we salvaged the team and it motivated me to pick up the Job at Akwa United “.

Ayeni further explained that the Chairman of Akwa United has been fatherly, his professionalism can not be faulted and the unity in the team has paved way for the good run so far in the league.
“Akwa United is a wonderful family to be with, I love the organisation, professionalism and Unity which has helped my stay.
I adapted on time and hope to actuslise the team’s dream at the end of the season”.

Coach Deji Ayeni had gone six matches unbeaten in the month of April, his first match against Rivers United ended in a one all draw barely days he got engaged.