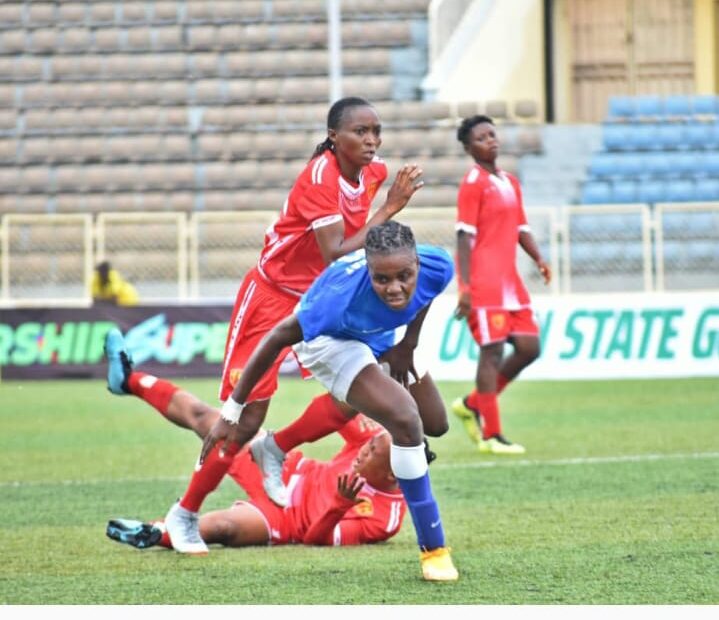 NWFL Premiership continues midweek and we have you covered with previews to some of the big games. In the first of our six featured games, Edo Queens look to keep the hear on top of Group A when they travel down to Calabar to face bottom side Pelican Stars. Confluence Queens welcome Naija Ratels to their new home ground, the Ilorin Township Stadium, while Bayelsa Queens will be aiming to go top, when they visit Abia Angels in Umuahia.

It’s a battle between the top team and the bottom one. Pelican Stars have suffered three defeats in the hands of Confluence Queens, Nasarawa Amazons and Osun Babes respectively and will face another league giant, Edo Queens who arrived Calabar on Monday through air.

Edo Queens are on top of the log in Group A and have a good away record this season, getting maximum points in Gombe against Adamawa Queens and a point in Lokoja against Confluence Queens. With this, they will be confident that they can get maximum points at the U.J Usuene Stadium on Wednesday.

Pelican Stars, surely will give a good fight In front of their fans and the ‘Betsy Obaseki Ladies’ might have it difficult if they are complacent.

The two top scorers in the league will face each other on Wednesday at the Ilorin Township Stadium. Mercy Omokwo and Olamide Adugbe have scored four goals each in the league this season both sit on top of the goal chart.

Confluence Queens will be playing at their new home ground, the Ilorin Township Stadium and will face a young and determined side, Naija Ratels, and will be aiming at getting all three points.

Naija Ratels will fancy their chances of giving Confluence Queens something to think about. Bankole Olowookeere is likely to make one or two changes, with Motunrayo Ezekiel and Bunmi Oladeji, presently unavailable due to national team assignment.

Liadi Bashiru started the season brightly and won’t want to give the ‘Ratels’ any chance to pick any point in Ilorin.

Two northern sides meet at the Lafia City Stadium. Nasarawa Amazons are presently fourth in Group A, despite having two big wins in their first two games. They lost away to Edo Queens last week and seems to be a stronger team than their opponent on Wednesday.

Danjuma Christopher wouldn’t want to remember how the team started so poorly last season and have done everything possible to strengthen his team this season and no doubt they have been a very good side.

Adamawa Queens got their first win last week against Confluence Queens, in a game they fought so hard to earn the victory.

FC Robo Queens suffered a narrow defeat against Sunshine Queens in Akure last week and will face Delta Queens on Wednesday in Lagos. Delta Queens surprisingly played a 1-1 draw with Bayelsa Queens at the Nembe Township Stadium on Matchday Two and would be aiming at doing the same to the Lagos Landladies’ In front of their home fans.

The Lagos Landladies’ are always a very difficult team to beat at home. They are reasonably a very strong team and have exciting young players. They are more determined than ever with the involvement of Gov. Babajide Sanwo-Olu in the well-being.

While Bayelsa Queens won Royal Queens by 3-0 last week, Abia Angels fell 4-0 like a pack of cards to Rivers Angels in Port Harcourt. The game in Umuahia is a very important one for Abia Angels. They have only one point from three games and are second bottom just behind Royal Queens who drew against them at home on Matchday Two.

Bayelsa Queens like a predator, would be hoping to feast on their prey, but it won’t be so easy. Abia Angels, though, a modest team, can get things done at home, play well and earn good results against big sides. It is expected to be a difficult game for both sides.

An important game for Royal Queens, with just one point from their last three games. For Sunshine Queens, they recorded their first win of the season last week against F.C Robo Queens in Akure and will head to Warri with their spirit so high.

Royal Queens lost 3-0 in the hands of Bayesla Queens last week, after they had earlier lost 4-0 at home to Rivers Angels. Their only point was gotten in Umuahia against Abia Angels.