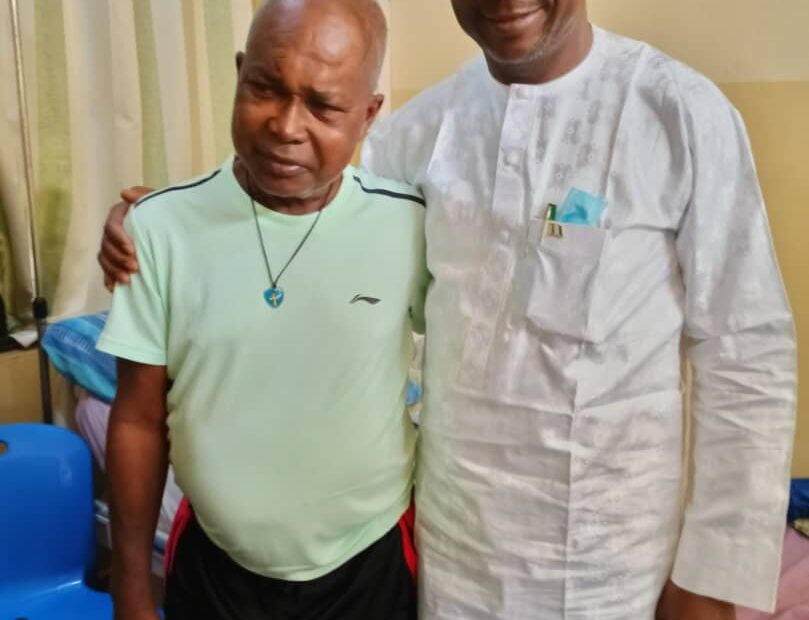 The NFF President was at the hospital on Tuesday alongside NFF Executive Committee member, Sharif Rabi’u Inuwa Ahlan to check on the health status of the former Green Eagles Star  who has been suffering from an undisclosed illness.

Gusau who described  Nwosu as a national hero further noted he owe it a duty and responsibility to give the former Nigerian International  a “Pat in the back” at a  time when the former  ACB of Lagos midfielder is battling with ailment.

According to the NFF supremo ” Today I am here in Asaba to check on the health status of  one of our unforgettable national heroes in person of Henry Nwosu.”

“Nwosu’s contribution to the development of our football cannot be overemphasised.”

“At this trying time of his, I, on behalf of the NFF Executive Committee wish Henry Nwosu a speedy recovery and it is my believe that Mr. Nwosu will surmount this health challenge  God’s willing.”

A gifted midfielder in his hay days, Henry Nwosu was the youngest member of the victorious Green Eagles team that won the nation’s  maiden AFCON title in 1980. He also scored Nigeria’s only goal at the 1980 Olympics.