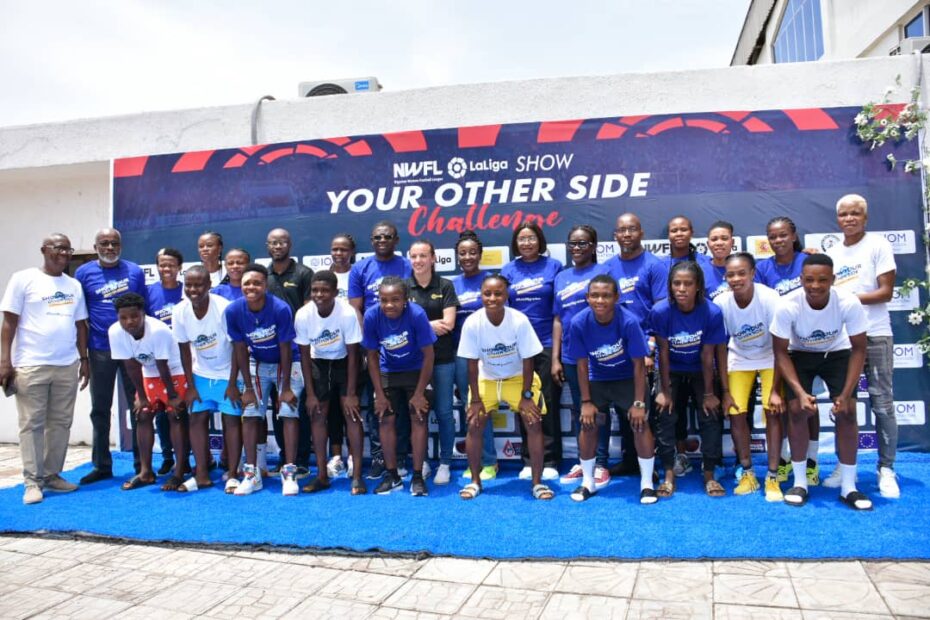 The Nigeria Women Football League (NWFL) and Laliga, in partnership with the UN-IOM & The Edo State Government held an interactive panel discussion heralding the ‘Show Your Other Side Challenge’ on Saturday in Benin themed ‘Football Gender Equality And Safe Migration’.

As part of commitment to discourage youths, especially young girls from being lured into human trafficking and irregular migration, the Panelists provided relevant overall guidance and supports on policies dialogues on international migration in Nigeria and Africa as a whole.

IOM Nigeria Awareness Raising Officer Mrs Cyprine Cheptepkeny noted that alot of work has been done on illegal migration and human trafficking in Nigeria, thus, there has been a huge improvement in that area.

Cheptepkeny, a Kenyan said that the organisation was not campaigning against migration, but that whoever chooses to travel abroad should do that legally.

Stressing that the testimonies of the returned migrants from countries such as Libya, Germany, Italy and Lebanon, should be enough to discourage prospective irregular migrants from the adventure.

“Football is one of the aspects that UN-IOM engages in to capture the attention of young people and provide them with adequate information on the risks of irregular migration and safe means to travel.

Also speaking, Edo State First Lady, Mrs Betsy Obaseki hailed the work of IOM in curbing illegal migration and human trafficking in the state, also noting that the State Government will keep on working to discourage young girls from moving abroad through the wrong means.

“We have been able to move from Number One to Number Five In Human Trafficking. The Edo State Government will keep fighting headlong by ensuring that those who aid and abet Gender Based Violence are joined in the law suit. We have a strong team that are working together to ensure that cases like this are pursued to a logical, where justice will be served”

Chairperson, Nigeria Women Football League (NWFL), Aisha Falode also emphasized on the need for young girls to keep their dreams alive, by migrating legitimately, instead of desperately seeking to leave through irregular channels.

“It is important that whenever young girls leave the shores of the country, they must do it the right and safe way. They should understand that leaving illegally totally unacceptable.”

Former Realmadrid and Super Eagles Midfielder, Mutiu Adepoju encouraged young girls to be disciplined and committed to whatever they believe in and shun anything that has to do with human trafficking.

Comrade Phillip Shuaib, Edo State Deputy Governor suggested that young people, especially women, should be awoken when it comes to subject of matters like illegal migration from Nigeria to other parts of the world. He disclosed how the State Women Team, Edo Queens is the only women football team in the world receiving the same salary as their male counterparts. Saying that the State Government have great respect for the girlchild and would continue to fight against human trafficking and illegal migration.