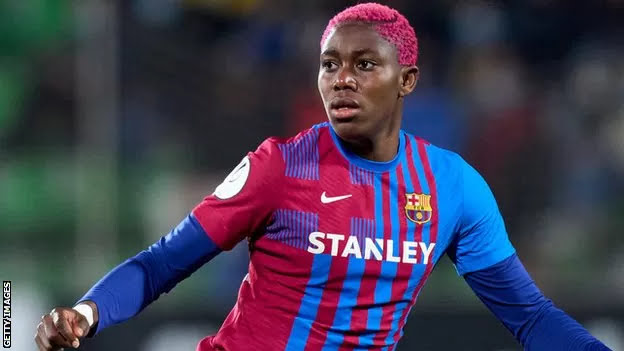 Barcelona star Asisat Oshoala has yet again heaped praises on Gift Monday after she scored a brace against Edo Queens on Thursday at the Samuel Ogbemudia Stadium, Benin.

The youngster had earlier netted a hat-trick on Tuesday against Naija Ratels and scored one in their game against Rivers Angels on Matchday one of the NWFL Premiership Super 6.

Oshoala, who recently won the pichichi after she finished as the top scorer in the Spanish women’s league, reacted to that performance from her national teammate, taking to her social media account to hail the gifted forward.

Gift Monday has scored six goals in three games for her team Bayelsa Queens at the ongoing 2022 NWFL Premiership Super 6 and is presently the top scorer in the league with Nine goals.

Bayelsa Queens will face Delta Queens on Friday by 10 am at the Samuel Ogbemudia Stadium.