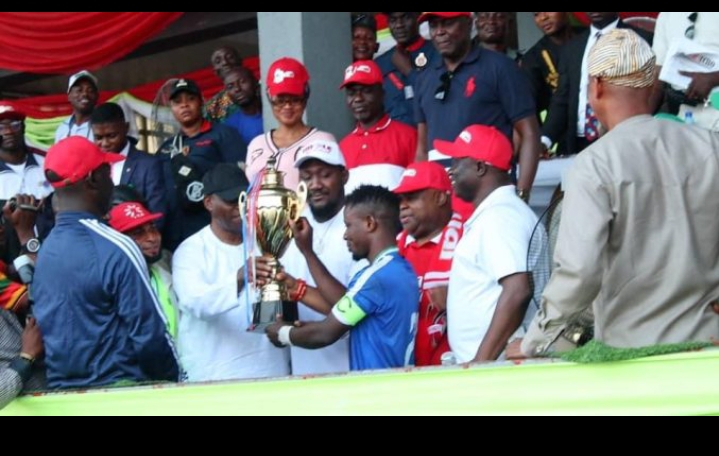 The match which was played at the Osogbo City Stadium, had in attendance great dignitaries led by the Executive Governor of Osun State, Senator Ademola Adeleke, who performed the official Kick Off ceremony alongside the initiator of the tournament, Rep Bamidele Salam, his Deputy, Prince Kola Adewusi, Yeye Dupe Adeleke-Sanni, Chief Deji Adeleke, Chief Of Staff, Alhaji Kasim Akinleye, Secretary to the State Government, Mr. Teslim Igbalaye, Senatorial Candidates of the PDP, Akogun Leere Oyewunmi, Olubiyi Fadeyi, Former Chairman of Osun PDP, Chief Sunday Bisi and many other top Government functionaries in the state.

In the losers final played earlier, Ilesa East finished in third place after defeating Ila United 5-4 via penalties, as both sides played out a 3-3 draw in regulation time.

Medals and Trophy was presented to the Winner, first runner up and second runner up, as Champions Egbedore United smiled home with a cash prize of One Million Naira, Second placed Osun FA, N500,000, Third placed Ilesa East FC pocketed N300,000, while fourth placed Ila United bowed out with N100, 000 as Prize Money.

The Initiator and brain behind the tournament, aimed at honouring the first Civilian Governor of Osun State, Otunba Isiaka Adetunji Adeleke, Rep Bamidele Salam, who represents the good people of Ede North Ede South, Egbedore and Ejigbo Federal Constituency, said the Competition will grow bigger next year, as more Corporate Bodies are expected to support the initiative.

Ojo Olowe of Atakumosa East FC with three goals, won the highest Goalscorer award, while Ajayi Iyanu of Osun FA won the best Goalkeeper award. The most valuable player of the tournament was won by Adeola Nifemi of Egbedore United, while Sola Ojedeni scooped the Best Coach award.