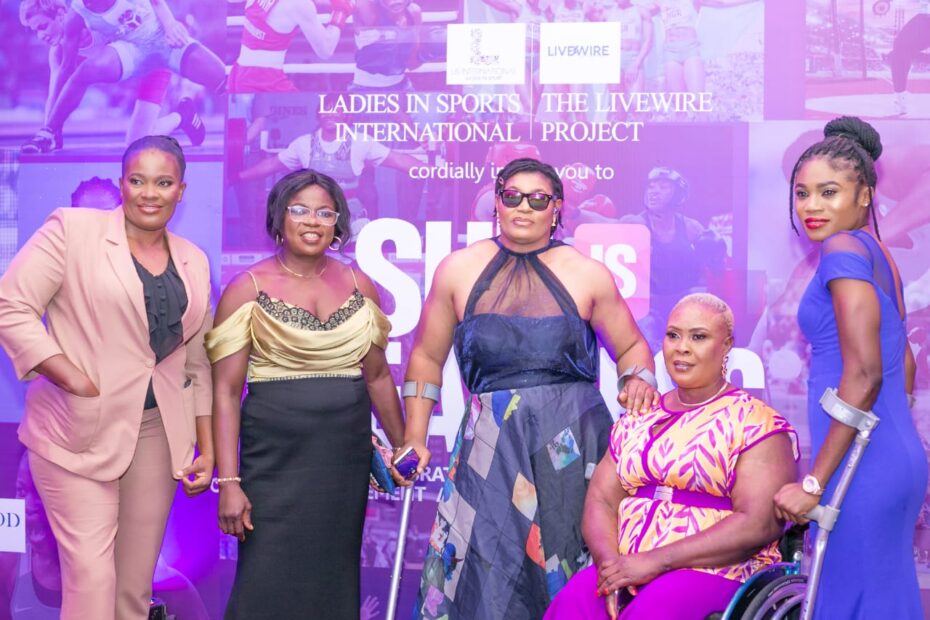 Nigeria’s female medallists at last month’s Birmingham 2022 Commonwealth Games, including world record holders Goodness Chiemerie Nwachukwu and Alice Folashade Oluwafemiayo, were treated to a spectacular night of fun, food, music and rousing compliments on Friday, 7 September at Sheraton Hotel, Ikeja in a colourful event organised by the Ladies in Sport (LIS) International and The LiveWire Project, in partnership with Berrywood Capital.
The special evening, tagged “She is Greatness”, celebrated the remarkable achievements of these exceptional women in the presence of dignitaries from various industries, including the wife of the Deputy Governor of Lagos State, Mrs. Oluremi Hamzat, who was represented by Mrs. Daba Mobolaji Mojisola, the Permanent Secretary to the office of the Deputy Governor.
Speaking on behalf of the wife of the Deputy Governor, Mrs. Mojisola said: “I appreciate the initiative of LIS International for coming up with a remarkable programme like this. Today, we celebrate these amazons who have worked very hard and demonstrated physical strength, leadership traits and exceptional strategic thinking to become victorious.

They have inspired us that we can all attain greater heights in life. The “She is Greatness” initiative has also brought to the fore the significance of having reward mechanisms in place for any landmark achievements recorded. We should therefore continually recognize, encourage and celebrate the success of our women in every field. This will motivate them for more conquests and more laurels.

“Gone are the days when women were relegated to the background and their roles confined to the kitchen. Our female athletes have shown that barriers can be broken through hard work, luck, passion, commitment, perseverance, courage and prayer. The impact of these young amazons will inspire the younger generation of the girl child.”

When giving the welcome speech, Antoinette Lecky, founder of The LiveWire Project, waxed lyrical about how the Nigerian female athletes “owned the show” in Birmingham, winning all of the country’s gold medals and ensuring Nigeria achieved its best Commonwealth Games outing.

A minute’s silence was observed for HRH Queen Elizabeth II.
Hansatu Adegbite, the Executive Director, WIMBIZ, said: “We are so proud of the women in sports. “It is no small feat.

There is so much more that should be done for you and will be done for you. Thank you so much for making women proud and thank you so much for being Nigerian women that made women proud.” She used the opportunity to invite the female athletes to the WIMBIZ 21st Annual Conference scheduled for November adding that “we will ensure to do something for you”.
The founder of LIS International, Tega Onojaife, who drew lots of praise on the night for taking the initiative to organise such a beautiful event, was given a standing ovation as she took the stage to give the closing remarks. Onojaife explained that it did not feel right that the triumphant return of these athletes was met with silence after all the social media noise that was made during the Games.

Making reference to what Adegbite said earlier, Onojaife acknowledged that the “She is Greatness” dinner is not enough to really appreciate the efforts of these athletes, but it is “just a start”.

“This evening I just want to say thank you, you are amazing, you are great, you have excelled, don’t let anybody tell you that you are not valuable, you are worth everything we are asking for and even much more and in our small way we just want to celebrate you this evening.”

The event was also attended by the Founder of Lagos Women Run Tayo Popoola and the former Presidential candidate, Khadijat Okunnu-Lamidi.
The athletes were then invited to the stage and surrounded by fireworks as Nigerian female singer Fave closed the show with an energetic live performance.
LIS International partnered with a few Nigerian fashion designers and with Zaron and Nuban Beauty to provide the athletes with  gorgeous looks for the night.