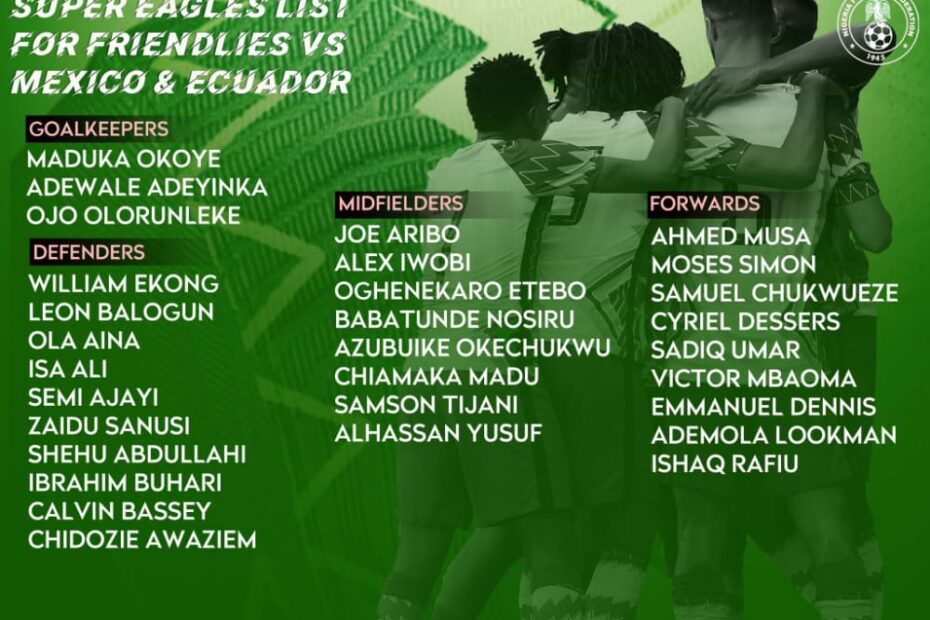 Super Eagles’ First Assistant Coach, Salisu Yusuf has released a list of 30 players, including Captain Ahmed Musa and forward Moses Simon, ahead of the prestigious international friendly matches against the ‘A’ Men National Teams of Mexico and Ecuador in the United States of America.

The three –time African champions will clash with CONCACAF powerhouse Mexico at the AT & T Stadium in Dallas, State of Texas on Saturday, 28th May, before flying to New Jersey to tackle Ecuador at the Red Bull Arena in Harrison on Thursday, 2nd June.

Yusuf, who is also Head Coach of the CHAN and the U23 teams, has included eight home–based professional players, including goalkeepers Adewale Adeyinka and Ojo Olorunleke, defender Ibrahim Buhari, and forwards Victor Mbaoma and Ishaq Rafiu.

Only 25 players will make the final list for the tour, which is preparatory to next month’s 2023 Africa Cup of Nations qualifying matches against Sierra Leone in Abuja (9th June) and São Tomé & Príncipe in Marrakech, Morocco (13th June).

After a comfortable 2-0 win and three maximum points secured against defending champions and reigning Africa’s best, Ghana on Sunday, Nigeria’s Flying Eagles are expected to keep things intense but firm against the Junior Etalons of Burkina Faso on Wednesday, to earn their semi final ticket at the ongoing WAFU B U20 Championship in Niamey.

Both teams will take the pitch at 5pm at the Stade General Seyni Kountché, the same venue where the Flying Eagles enacted a masterclass to send African champions Ghana tumbling on Sunday. Ibrahim Muhammad and former U17 star Ahmed Abdullahi scored the goals that downed the Black Satellites.

Coach Ladan Bosso still has the full complement of his squad, and is unwilling to rest any of his regulars as he looks to make sure of a place in the last four.

“We must approach the match against Burkina Faso with even stronger determination and desire than we did for the Ghana match. A ticket to the semi finals is key at the moment, and we can then start thinking of a ticket to the final and a place in the Africa Cup of Nations next year.”

Only the two finalists at the WAFU B Championship in Niamey will be eligible for next year’s Africa U20 Cup of Nations, already scheduled to take place in Egypt February/March.