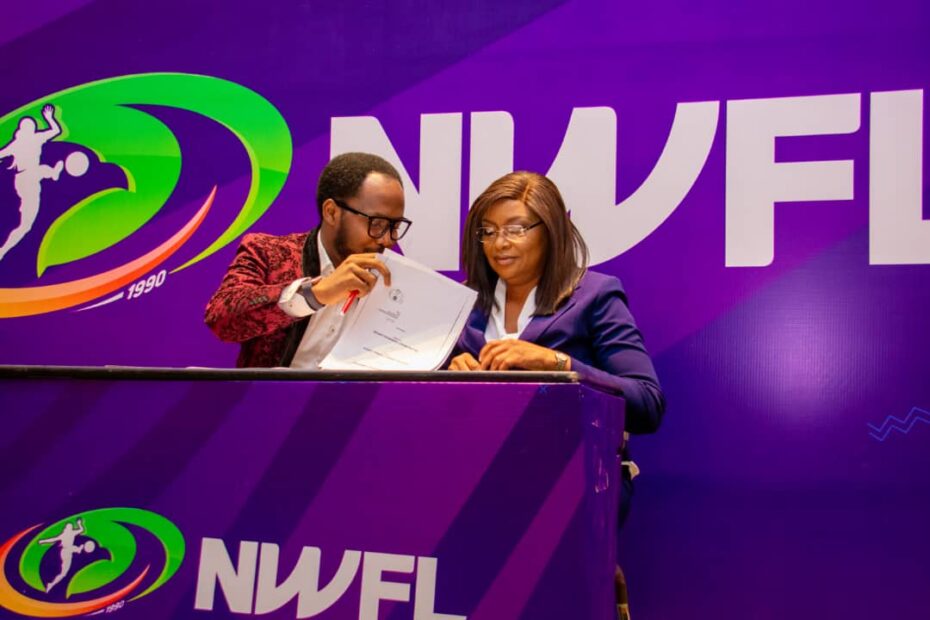 After the unveiling of the Super Six sponsors, the NWFL represented by the Chairperson, Aisha Falode and the representative of Tulcan Energy Resources, Dolapo Akinwale, signed the contract of agreement for the sponsorship on the floor of the event, the Ball Room 1 of the Lagos Marriott Hotel, on 122, Joel Ogunnaike Street, GRA, Ikeja, Lagos.

Falode, said on the Tulcan Energy Resources sponsorship of the Super Six, that, the sponsorship is a testament to the good works and consistency the league has demonstrated in the past. Adding : “The sponsorship is to create more impactful, competition & more meaningful development in the Women’s football league.”

The Tulcan Energy Resources representative disclosed after the unveiling ceremony that, the company will bankroll the total prize money for the NWFL Premiership Super Six, to the tune of N10 million. With the eventual champion taking home N5 million, second place N3 million and the third place, N2 million.

The NWFL Chairperson, Falode, revealed that, the Nigeria Women Football League on its own will give each of the six teams the sum of one million naira for wearing the Tulcan Energy Resources branded jerseys for all matches of the Super Six in Benin City, Edo State, when the battle resumes on May 16, to 22nd.

The Head, Strategy, Tulcan Energy Resources, noted that, the company is willing to enter a long term sponsorship agreement with the NWFL on the Super Six. And the number of years in the first instance will be communicated to the leadership of the Women’s league headed by Aisha Falode, stressing that: “The company has supported different businesses and with the NWFL and Nigeria football, it took them six minutes to seal the deal.
“Our strategy intentions are to grow women’s football league in Nigeria and these are the reasons we are sponsoring the NWFL Super Six. We are also planning to sustain this.”

Each of the Tulcan Energy Resources branded jerseys designed by Owu Sports Wears Limited have the traditional home colours of the six clubs.

She expressed the company’s commitment towards a total support for the further development of women’s football in Nigeria with their sponsorship, which she said will be on a long term.